Sorry, ya'll, that it took me so long to write about my experiences at the New Kids on the Block concert in Charlotte. It's been almost a month since the concert ....
I haven't been to very many pop/rock concerts - most of my experiences have been at country concerts, so I wasn't really sure what to expect. Actually, what I expected is what I saw - 20 and 30-something women screaming like teenage girls!
I was a little worried about hearing the New Kids live. Let's face it, they are not "new" kids anymore and they haven't toured in 15 years.
But I was not disappointed.
The concert opened with some of their classic hits, but also included songs from their new album "The Block." Some of the songs on "The Block" that I didn't like before the concert I now like simply because I heard them live.
Of course I swooned when Joe McIntyre - who will be my favorite NKOTB member 'til my dying day - sang "Please Don't Go Girl." But later in the show, it was adult applause and genuine respect I lavished on him for his performance of his solo hit "Stay the Same."
Say what you want about the New Kids (those who are haters, that is), but it takes not only talent to wage a comeback, but guts. And New Kids fans are the best in the world, so how could a reunion be anything other than a hit?
Here are some videos I found on YouTube from the Charlotte show. Enjoy!!

I'm a little behind in blogging. I blame it on the excitement over going to see NKOTB (more on the concert in another post) and the election (which is blessedly, now over.)

One of the perks of being a lifestyles writer is that companies often send us new products to test and review. One of the more interesting pitches I received was for the new Pumpkin Master's Carving Kits.

I've used the old ones, but the new and improved ones have updated patterns and there was even one with various decades (which included a lava lamp that we carved.)

My family enjoyed carving pumpkins this year. Last year Nathan didn't really understand, but this year he liked pulling seeds out of the goop.

Here's some pictures of the finished products. 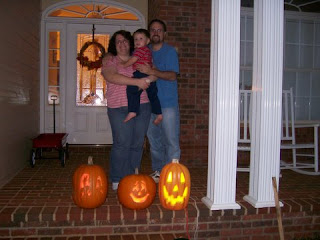 The soundtrack of my life

Later this month, I'll be travelling to Charlotte to see New Kids on the Block in concert, fulfilling a childhood dream for me.
I've been listening to their old songs online and in the process, have stumbled across some of my favorite songs from that era.
Which got me thinking... what does the soundtrack of my life sound like?
So, to honor my New Kids, for the days leading up to my first NKOTB concert, I'll be blogging about my favorite, life-defining-moment songs from the past 20 years.

In 1988, I was 11 years old and a sixth grader at Cliffside Elementary School. I was also a student in Mrs. Hamrick's class -- my mom.
The number five song of 1988 was "Sweet Child Of Mine" by Guns 'N Roses. GNR was big that year - so big that when given the opportunity to name our make-believe town for our career unit, we named it Paradise City.


George Harrison was back on the charts, and not with the Beatles, but solo with "Got My Mind Set On You." He was my mama's favorite Beatle, so the love of this song was something we shared.

Did you know Shelby City Park used to have a restaurant?
I didn't until this morning. I was over at the park talking to Charlie Holtzclaw and Tommy Forney about the park's 60th anniversary celebration. While talking, Charlie pulled out an old pamphlet about the park that included, among other things, a menu for the now defunct restaurant.
"It was located where our offices and aerobics room are now," Holtzclaw said.
I wish it was still there - along with the same prices. For $1.75 you could get "Lobster Louie" - sliced lobster on lettuce bed, potato salad, hard boiled eggs, cole slaw, sliced tomato, olives, sweet pickles, thousand island dressing, bread, butter or crackers.
Sounds good, doesn't it?
at 12:30 PM No comments:

If you like to cook, have I got a story for you

Did you know you could win tickets to The Star's Taste of Home Cooking School on Oct. 14?
All you have to do is send me your favorite recipes. Those received by Friday, Sept. 26, at 5 p.m. will be put into a drawing for four tickets to sit on stage during the school.
Here's how: Send your family's favorite recipe to The Star, Attn: Lifestyles, P.O. Box 48, Shelby, NC 28151. E-mail recipes to starlifestyles@shelbystar.com. (Please put recipe contest in the subject line.) Include your name, address and daytime telephone number with all entries.
The contest is open to anyone in The Star's circulation area. A drawing will be held to determine the winner, who will receive four tickets to sit on stage during the cooking school and a feature about them and their recipe in The Star. Recipes received during the contest will be published in The Star's Holiday Cookbook.
Deadline to enter is Friday, Sept. 26, at 5 p.m. Employees of The Star and their family members are not eligible to win.
at 1:56 PM No comments: